CHP Act 2016 – Summary of Regulations within the new CHP Act

The new CHP-Act (KWKG 2016) is effective in Germany from the 1rst of January 2016. The CHP expansion target has been lowered and the regulations have become more complex. Who will benefit from the new CHP Act and which CHP owners will be worse off? 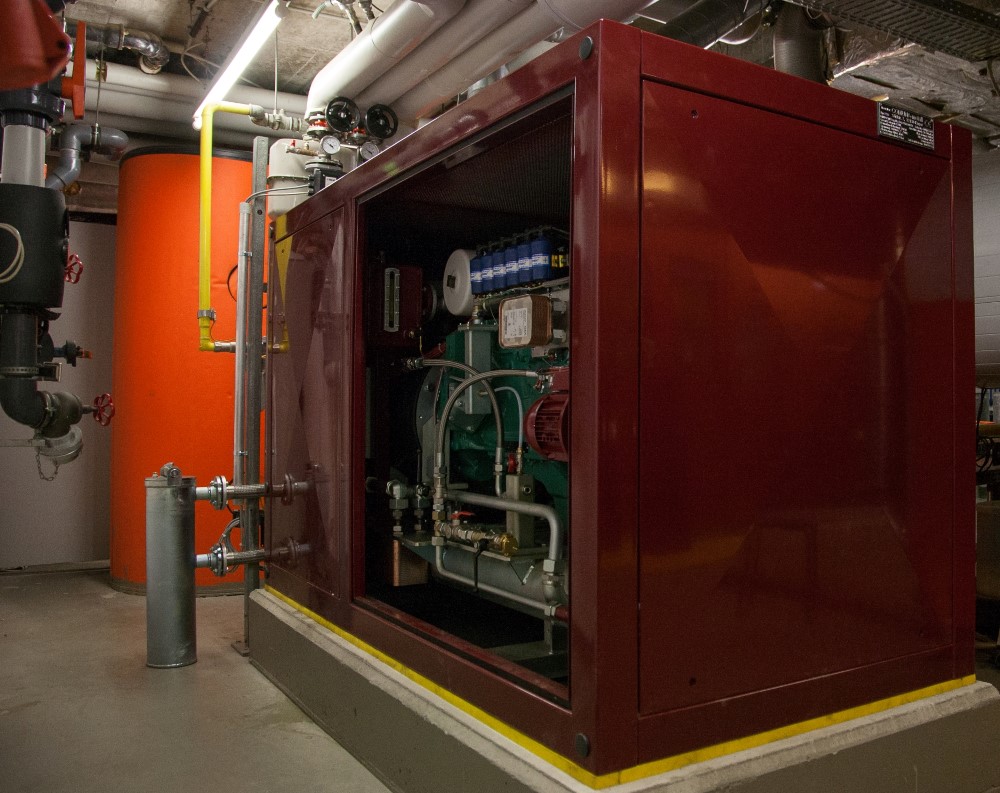 For reasons of climate protection, highly efficient CHP plants in Germany are promoted by the CHP Act. Owners of Combined Heat and Power Systems receive temporary funding (CHP bonus) for the electricity produced by their cogeneration plants provided the conditions for funding are met. In 2013 more than 7,000 CHP plants with an electrical power of 1,400 MW were installed. In 2014 the same amount of CHP plants were realised with a higher amount of electrical power of 1,700 MW as new installations or reinstallations with substantial modernization.

In October 2014, a scientific evaluation report on the CHP law was submitted. Based on that study the drafts for the new CHP Act in 2015 were written. The new CHP-Act has 35 paragraphs and is more comprehensive than the previous CHP-Act which had a mere 20 Paragraphs. The new CHP-Act (KWKG 2016) is effective in Germany from the 1rst of January 2016.

While CHP plants were promoted in Germany regardless of their fuel, the new CHP law does not promote new CHP plants that are fueled by coal. In addition efforts within the new CHP law will advance the development of district heating as well as heat and cold storage.
The new CHP Act provides in addition to the promotion of new systems also financial support to existing installations. For this reason, the maximum annual funding volume of currently EUR 750 million was increased to € 1.5 billion.

The German government expects the new CHP Act to improve the prospects for the maintenance and expansion of cogeneration, targeted to promote the conversion of coal to gas as well as coherence with other goals and measures within the energy transition. The previous expansion target of EUR 145-150 TWh / annually (25% CHP share of the net electricity production) in 2020 was replaced by a moderate expansion target in the new CHP Act. It is expected that the CHP 2016 will lead to an increase in net electricity from cogeneration to 110 TWh / yr by 2020 and to 120 TWh / yr by 2025.

Promotion under the CHP Act is carried out by bonuses, which are limited in time and payable in addition to the market-based electricity price. Newly constructed CHP plants, modernized CHP plants and upgraded CHP plants are entitled to funding. The term “upgraded” is used for example, if an existing boiler is retrofitted with an additional new steam turbine and is therefore upgraded to a CHP plant.

The term “modernized” CHP refers to an existing CHP plant where old system parts relevant to determining efficiency are replaced with new components. If the cost of such a modernization exceeds 25% or 50% of a complete new construction of the cogeneration plant, this modernized CHP plant receives funding of more than 15,000 or 30,000 full load hours. In the future, modernized CHP plants must provide sufficient evidence that the modernized CHP plant is more efficient than the existing plant. Modernization can only be realised if the existing system has reached a certain age. Thus, for example. the largest modernization option in which 50% of reconstruction costs must bed documented only possible after an operating period of 10 years. 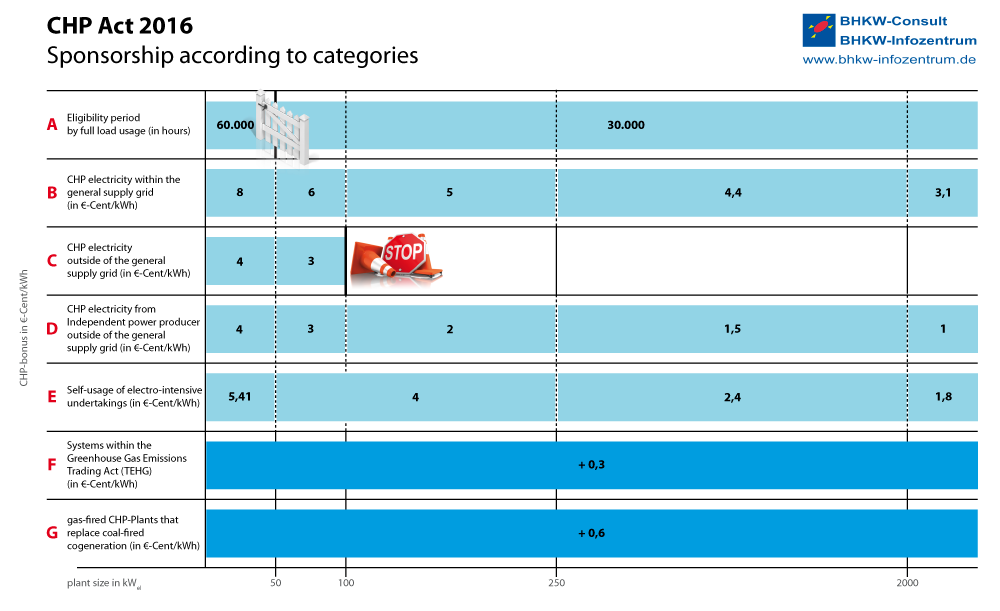 Basically, according to the new CHP Act only electricity from cogeneration is entitled to the payment of a surcharge if it is fed into a general supply grid. There are exceptions for small CHP plants with an electrical power up to 100 kW and for CHP installations used by electro-intensive undertakings.
A modified CHP support also applies for cogeneration plant owner, who provide CHP electricity from cogeneration to end consumers outside of public networks and is paying the full EEG surcharge for that electricity. This regulation applies for example for operators of industrial CHP plants in industrial areas as well as operators of CHP plants supply electricity for tenants.

The eligibility period and the level of support attainable through the new CHP Act are shown in the table. Compared to previously obtainable CHP surcharges for electricity fed into the general supply grid the new CHP Act enables increases of up to 83%. On the other hand, the CHP surcharges for the usage of electricity outside of the public grid have been significantly reduced or completely omitted. Special arrangements apply if an electricity and cost-intensive industry uses self-produced electricity from cogeneration. The said granted CHP boni correspond to the subsidy rates of the CHP Act as were in force until 31.12.2015.

Additional bonus incentives are granted for CHP plants subject to the conditions of the Greenhouse Gas Emission Trading Law (TEHG). In addition CHP plant owners who replace their existing CHP plant based on coal or lignite, receive a subsidy bonus of 0.6 cents / kWh over the entire funding period.

In order to minimize the administrative burden of micro-cogeneration units, owners of CHP in the power range of up to 2 kW can receive their CHP surcharge payments as a flat one-time payment. This corresponds to a subsidy of 2,400 euros per kilowatt. So far, micro-CHP systems received KWKG allowance of 1.623, – Euro per kW.

Due to the current decline in prices reflected in the development of the usual price diagram, existing CHP plants may no longer be able to operate economically in the municipal sector. Therefore, a supplementary funding was introduced into the new CHP Act to accomodate existing cogeneration systems in the municipal sector with more than 2 MW electrical cogeneration power if they are no longer supported by the previous CHP Act. The promotion of 1.5 cents / kWh for existing plants applies only for CHP plants which are operated with gaseous fuels and includes a maximum funding duration above 16,000 full load hours. 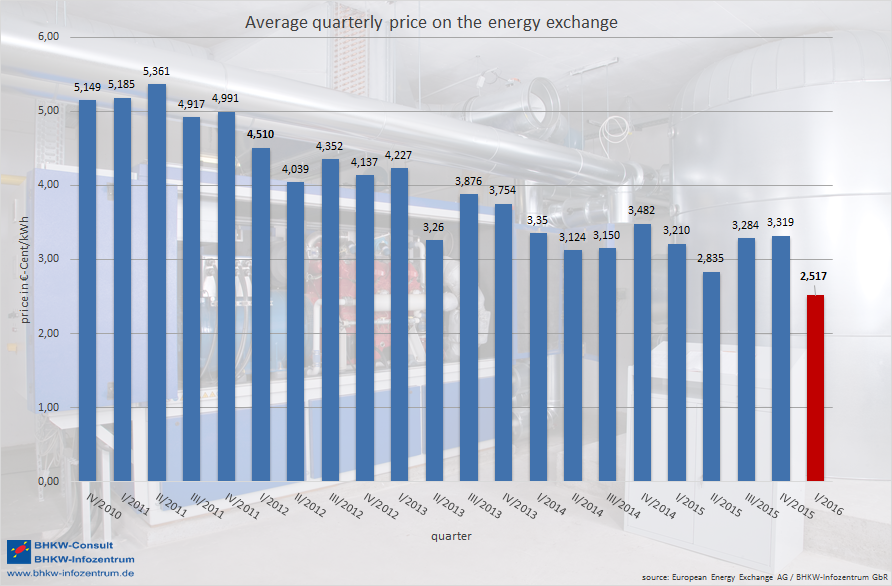 The new CHP Act will integrate new CHP plants even stronger into the future electricity market. CHP plant owners should be able to react to market signals and become part of the variable renewable energy (photovoltaic and windenergy) sources.

Therefore owners of new cogeneration plants with an electrical capacity of more than 100 kW are committed to consume their own produced electricity or to market directly, which incorperates supplying power to a third party. A third party can also be an end consumer such as a tenant in an apartment building or an industry in an industrial area.

Negative electricity prices on the market are a sign for times of surplus of electricity. For this case, CHP bonus is suspended during that period in order to prevent CHP becoming a competitor to non-controllable renewable energy. The CHP generated power during such a period receives no CHP bonus. Although negative hour contracts are not taken into account within the power delivery duration (60,000 or 30,000 full load hours). In 2015 there were approximately 110 hours of negative electricity prices.

Until 31.12.2015 fuel cells benefited from attractive special arrangements by CHP Act 2012. Exemplary here the CHP bonus of 5.41 cents / kWh which has been granted for an eligibility period of 10 years regardless of power capacity. In the new CHP Act fuel cells are classified in the same way as any other CHP technology. Owners of fuel cell CHP plants will receive the higher feed-in tariffs of the CHP Act 2012 if the plant is ordered by 2016 and put into operation by 31.12.2017.

CHP support requiries authorization from the authorities, the Federal Office of Economics and Export Control (BAFA). In principle, an application for approval of a CHP plant according to the CHP Act can only be made after the plant is put into operation. Long-term projects such as CCPP are threatened due to a change in funding conditions regulated by the CHP Act during their project period. This uncertainty has lead to a rather low willingness to invest. To compensate this the possibility of a preliminary decision in the new CHP Act for CHP projects over 10 MW of electrical power was introduced. The binding effect of a preliminary decision includes amount and duration of the surcharge payment in accordance with the details disclosed at the time of application and the relevant version of the bill of law. The request for preliminary decision must be made before construction starts and includes specific deadlines concerning construction and commissioning of the plant.

For several years district heating and heat storage have been eligible for a single payment within the framework of the CHP Act. In 2013, 1.017 district heatings by a length of 423 km were funded with a total of 110 million euros. For cooling networks and cold storage the conveying possibility, provided that the refrigerant from a combined heat and refrigeration plant (CCHP) originates. Promoting cooling networks and cold storage is rare and seldom taken into accounts. Plant owners have to demonstrate no later that 36 months after start-up, that 60% of the utilised heat has been obtained from a cogeneration plant. In some cases industrial surplus heat and heat from renewable energy sources meet funding requirements. The funding for small district heating up to 40% and for district heating with an average mean nominal diameter over 100 mm up to 30% of their expenditure. Heat storage can also be promoted by the CHP Act. In the year 2014, 129 heat storage systems with a total of 122,000 cubic meters of storage capacity were funded with approximately 15.5 million euros. The amount of funding is capped by larger heat storage systems over 50 cubic meters to 30% of ‚allowable costs. Smaller heat storage systems receive a subsidy of EUR 250 per cubic meter of storage capacity (water).

Cogeneration producers in Europe will benefit from the new German CHP Act in the future. According to the new Act, CHP plants built in a european country and under certain conditions will be entitled to receive the CHP bonus.

The new CHP Act is written in an even more complex manner than the previous support systems for Thus, the legal framework for cogeneration plant operator for the next six to nine years appear clear – although of EU State aid rules have reasons an annual monitoring will take place.cogeneration. Numerous new demands need to be met in order to allow a flexible compensation of CHP plants competing in a fluctuating renewable energies market. A considerable overhead in measurement, direct selling and the management of investments will be the consequence.

Through the new CHP Act, the German government demonstrates the importance of cogeneration as a flexible and balancing energy source. It is also an obvious intention of the legislature to grant higher funding for cogeneration plants that otherwise had low revenues such as in district heating. On the other hand plant owners who primarly or even entirely use electricity from cogeneration receive smaller boni or in some cases none at all.

In the segment up to 50 kW (Mini-CHP), the new CHP Act will predominantly lead to economic improvement. In particular, CHP plants, which are operated in the municipal, residential sector or in school buildings with a capacity of 4,000 to 5,000 hours per year, will benefit from the funding period of 60,000 full load hours and the respective higher CHP bonuses for fed electricity from cogeneration to the public grid.

Fuel cells lose their special privileges within the CHP Act. However, due to a generous transitional arrangement, new projects can be brought forward and initiated until the end of 2016. Subsequently, an additional investment of federal funding is being considered. The expansion of district heating and heat storage with renewables, such as solar thermal support, will continue to be promoted. The CHP Act sets clear objectives and targets until 2022 with an outlook towards 2025. Therefore, the legal framework for cogeneration plant operators appear clear for the next six to nine years – even though state aid investigation rules may have grounds for an annual monitoring which will take place.